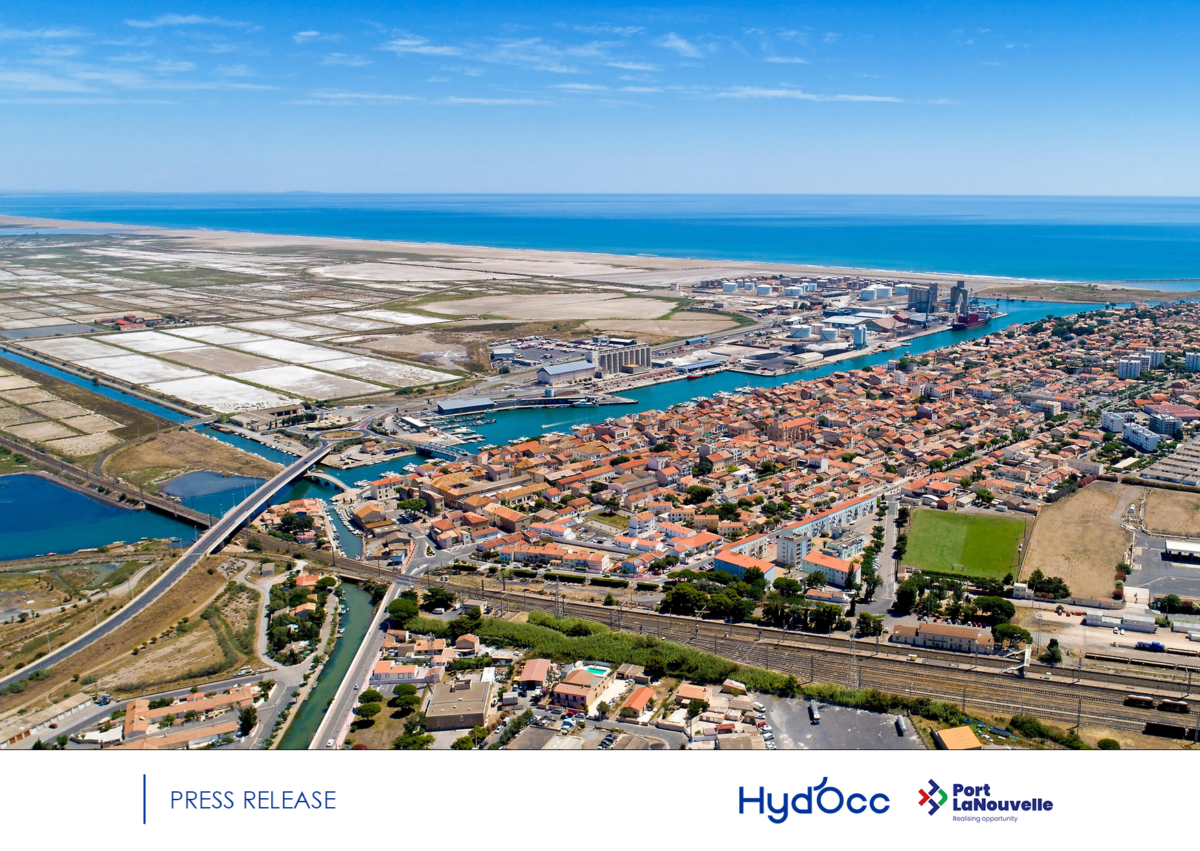 Port-La Nouvelle, 23 November 2022 – Hyd’Occ (a company specialised in the development, the financing, the construction, the production and the storage of renewable hydrogen) and the SEMOP Port-La-Nouvelle (a single-purpose semi-public company responsible for the planning, operation, management and development of the commercial port of Port-La-Nouvelle) have announced the signing of a Memorandum of Understanding (MOU).

This signature is a milestone for the future plant dedicated to the production and marketing of hydrogen from renewable sources, which installation within the port of Port-La-Nouvelle is planned for the second half of 2024.

The large production unit will be able to progressively reach 45 MW of electrical power generation capacity and the renewable hydrogen will be used to fuel the HYVOO/CORRIDOR H2 ecosystem, which will be equipped with 5 green H2 charging stations. It will also be able to cover maritime uses (with the Hydromer dredger) as well as uses in the port and the surrounding area.

This project carried out by Hyd’Occ and supported by the Region of Occitania, the ADEME, the European Union, the EIB and the Prefect of the region (as well as the Prefect of Aude, who is monitoring the progress of the project) via the recovery plan “France Relance”, led by the Prefecture of Aude, represents an opportunity to ensure the energy transition desired by Port-la Nouvelle, and meet the challenge of decarbonisation initiated by the Region of Occitania in its €150 million Green Hydrogen Plan. Hyd’Occ also reinforces the versatility and development of the commercial port of Port-La Nouvelle, which intends to position itself as a true Mediterranean hub for renewable hydrogen.

The company Hyd’Occ is the result of an agreement between the renewable energy producer Qair and regional climate agency AREC Occitanie. It is responsible for the creation of the first large-scale renewable hydrogen production unit in Port-La Nouvelle.

Hyd’Occ, winner of the French calls for projects “écosystèmes hydrogène” and “Corridor H2” and labelled by the Pôle Mer Méditerranée, has been recognised as a “Project of great ambition: LITTORAL +”.

SEMOP Port-La Nouvelle is a single-purpose semi-public company including the Region of Occitania, the Banque des Territoires and the Nou Vela consortium, which includes private operators (Deme Concessions, Euroports France, the Flemish fund Epico, Qair, and the CCI of Aude).

Since 1 May 2021, it has been awarded a 40-year concession contract for the development, operation, management and expansion of the commercial port of Port-la Nouvelle.